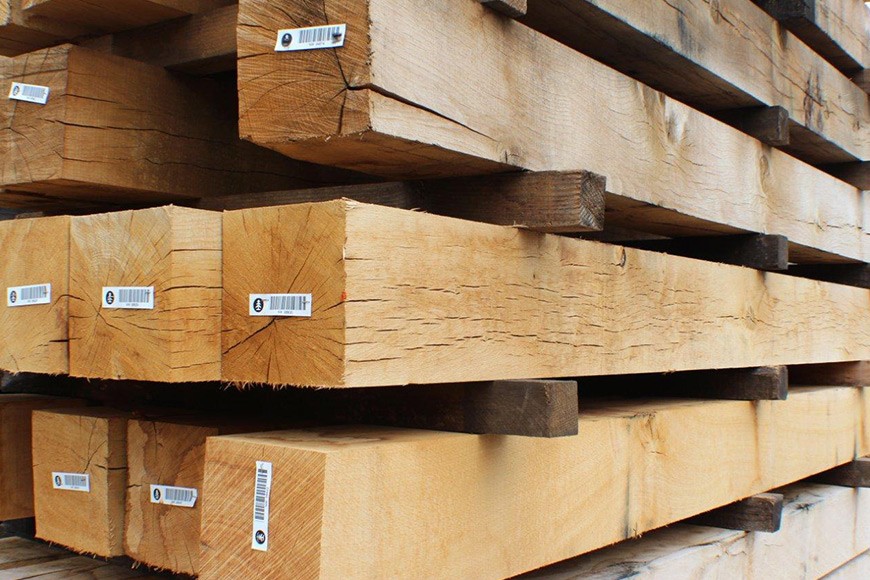 Green structural oak is simply fresh cut oak that has been felled in the last 3 - 6 months. It has a relatively high moisture content and is therefore prone to shrinkage and movement as the drying process takes it course. The shrinkage and movement by no means certain but it is a good idea to take it into account when making your purchase. Green oak is almost completely responsible for the construction of the UK's stately homes and ancient dwellings (so it cannot be so bad!) and should be viewed as a characterful alternative to air dried oak for structural internal use. It is also perfect for outdoor pergolas, barns and all types of new build constructions.

Air dried structural oak is exactly as it sounds, oak dries relatively slowly (approx 25 - 40mm per year) this is a general rule and should not be relied upon, it depends heavily on the environment in which the oak is stored. Our air dried oak beams have been stored in perfect drying conditions for between 3 - 5 years. We are happy that they can be relied upon to provide as much protection as is possible against future shrinkage or movement, in fact, we believe that our beams are the very best available and are sourced from a consortium of 5 professional sawmills in northern France who specialise in nothing else!

THA/TH1 and THB/TH2 are determined by certain characteristics, for example, THA grade oak can have knots that are for more than 0.2 (1/5) of thickness or width to which it relates, whereas THB can have knots 0.75 (3/4).

Once the oak is visually graded and deemed to be satisfactory for use, the TH code is then used (with the section size of the beam) by a structural engineer to work out what size of the beam is required for the relevant span and load.

Oak is a very tried and tested material which has been used for thousands of years, however, with the grading system and the standards, we have to adhere to, you can be safe in the knowledge that the oak beams we supply are able to pass modern grading tests.